Today I’m participating in a weekly blog hop called WIP It Up Wednesday, where authors share excerpts from their works in progress (WIP) and new releases.

I’m sharing from my forthcoming release Leather and Lace, which comes out this Tuesday, 09/13/2016! Read on for the blurb and the excerpt. 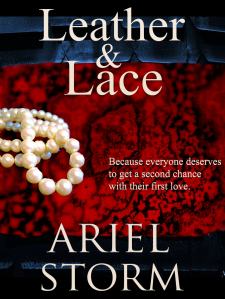 Because everyone deserves to get a second chance with their first love.

When Roxanna Chase finds herself alone in her tiny hometown of Haven, Indiana on Thanksgiving eve, she decides to do the one thing she always swore she’d never do: attend Chatterfest, an unofficial high school reunion held every year the night before Thanksgiving at Haven’s busiest bar, The Watering Hole. After a couple of cocktails and reminiscing with a classmate, Roxanna is overwhelmed, and a little turned on, when her old high school crush Nicholas Birch approaches her at the bar. He’s still as tall, broad-shouldered and sexy as he was thirty years ago. Since he’d dated her best friend in high school, Roxanna had always placed Nicholas in a box marked ‘hands off.’ When Nicholas admits he had feelings for Roxanna in high school, the two decide to leave the bar together and see what happens next. They quickly find that when old flames are rekindled, they can ignite into an inferno that refuses to burn out.

“I’ve wanted to do this since senior year,” Nicholas said before he placed a searing kiss on her lips.

Roxanna let out an involuntary moan when he gently parted her lips with his tongue. She wrapped her arms around his waist while their tongues mated and stroked. Placing her hands on his broad back, Roxanna tried to pull his muscular body toward her own. It felt like she couldn’t get close enough to him, as though she couldn’t get enough of him. As though sensing her urgency, Nicholas broke his mouth free from hers.

“It’s these clothes, they’re in the way,” he told her with a seductive wink.

He pushed her cardigan off her shoulders and down her arms, allowing her to pull the garment’s sleeves off her wrists. Her camisole came next. Nicholas eased it slowly over her head. When she was standing before him in only a bra, skirt and stockings, he reached down to caress the material of her brassiere between his thumb and index finger.

“This is almost too pretty to take off. Almost.”

Nicholas used the wide pad of his thumbs to stroke her nipples through the lace cups of her light pink bra. Roxanna’s knees nearly buckled at his touch, forcing her to grip his forearms. She whimpered as he continued to circle the protruding flesh of her nipples. It had been so long since a man had touched her in this way. Hell, she didn’t know if a man had ever touched her in this way. Nicholas seemed to use his caresses to not only illicit a response from her physically, but mentally, too.

Maybe it was due to their past friendship, but normally Roxanna never felt confident enough to stand before a man and let him disrobe her. Especially not in a semi-lit room. When she got naked with a man, she preferred the safety the darkness provided. Nicholas found the clasp of her bra and freed her breasts from their confines.

Her large breasts hung heavy and low on her torso. Nicholas grasped the left one in his hand, leaned down and flicked her nipple with the tip of his tongue.

He lavished the stiff peak with his tongue again before taking it into his mouth completely. Nicholas slid his other hand down her side until he found the zipper hidden in the seam of her skirt. Lifting his head from her breast, he used both hands to work the small zipper down. He pushed her pencil skirt down her hips until it pooled at her feet.

“I think you better remove your own stockings. I want you so bad, I’m sure I’d just tear the hell out of them trying to get them off you.”

Feeling emboldened by his words and the look on his face as he watched her, Roxanna bent at the waist to pull her boots off one at a time. Once she’d removed her footwear, she made a production of slowly rolling the soft, silky material of her stockings down her legs. Her breasts swayed side to side as she leaned down and pulled the ivory tights off her feet. Clothed only in her panties, she stood patiently in front of Nicholas. Waiting for him to pounce.

Leather and Lace release Tuesday, and will be available on All Romance eBooks, Kindle, Kobo and Nook for just .99!

Keep this blog hop going, click here to visit the rest of the participants and read their WIPs.