With less than a month to go until book two in the Talk Nerdy to Me series releases, today I’m sharing the first of what will be an on-going series. In these short interviews with the characters of the series, readers will get to know a little more about Dustin, Olivia, Jamie, Quinn, Sara, and other characters as each book comes out. 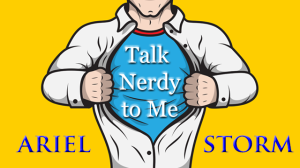 The first interview is with the man behind the genius that is the Nerdvana bar. If you’re not familiar with the bar, it’s basically a haven for geeks and all things geekery.  The Talk Nerdy to Me series combines cosplay, comics, video games, and hot romance in a fun nerd-themed bar.

When Olivia Sands walks into the hottest bar in Cascade Falls, she’s swept away by the cosplayers, gamers, and larpers. The atmosphere at Nerdvana is truly a haven for geeks, and Olivia can picture herself spending every weekend at the nerd-themed hangout. Or at least, she could before she finds out the bar’s owner is none other than Dustin Bradshaw, her first crush and the man who fled her life with no explanation four summers ago.

Of course, the years have done nothing to eliminate the magnetic pull between them, and now that they’re thrown together again they’re helpless to fight their attraction. Between working on her bespoke costume business Cosplaymates, attending grad school, and planning her future, Olivia doesn’t have time for dating. But Dustin will stop at nothing to finally make her his, once and for all.

Nerdy Words is book one in Talk Nerdy to Me, a series centering around the romances that blossom between bar staff and customers at Nerdvana.

Now, on to the interview!

What made you take the leap and open Nerdvana?

I just got tired of dreaming about it. One day I woke up and decided it was time to take action. It probably sounds cliche, but life is too short to do anything other than exactly what you want.

Why do you think the bar has been so successful?

That’s an easy one. Scarcity makes something more valuable. Simply put, there’s nothing like it in Cascade Falls. Like, no shade, but I know I was sick of going to clubs where people tried to flex by ordering the bottles with the sparklers coming out of them. On the flip side of that, if a bar wasn’t upscale it was almost too dive-y, you know?  I opened Nerdvana honestly because I’ve always wanted a place like that to hang out.

How is it working with Quinn?

She’s my best friend…she’s also a pain in my ass sometimes (laughs). No, seriously, she’s great. I’d be lost without her. Quinn has the best heart, plus she had lots of experience in the bar industry, which I totally lacked. We recently added another partner at Nerdvana. It’s my cousin Chase. He’s basically a serial entrepreneur and I know having him on the team is going to blow shit wide open at the bar.

Really? That sounds like something we won’t want to miss. Can you spill the details about any fun happenings coming up at the bar that we should keep our eye out for?

We’re working on opening up a new space in the lower level of the bar. It’s dedicated to RPG (role playing games). There will also be an additional bar there with a custom drink menu, and a DJ three nights a week. Once we get that going we’ll be doing some special events at the bar. It’s going to be epic. We’re aiming to keep the experience fresh and exciting, even for our regular customers.

We can’t wait for that. Switching gears, one final question. It’s personal, so hopefully that’s okay. Before dating Olivia you’d been single for years. What was it about Olivia that made you let down your guard and let her in?

I’d always thought of her as the one that got away, you know? Oh, I tried to pretend otherwise, but you can only lie to yourself for so long. And, she’s just the best (blushes and smiles from ear to ear). Everything about her intrigues me and simultaneously pushes me to be more, do more, to grow as a person. That’s a potent combination.

If you want to know more about Dustin, or any of the other characters in the Talk Nerdy to Me series, keep your eye out here for more interviews. And, of course the best way to get to know everyone at Nerdvana is to grab the books!

Book one, Nerdy Words, is out now. Get it at Amazon US, Amazon UK, Amazon AU, Amazon CA, Apple, B&N, Kobo.