Today I’m taking part in a new (to me at least) blog hop called Mid Week Tease. I love blog hops and I’ve been told on more than one occasion that I like to tease readers with my work, so this seems like a great opportunity to do both while reaching a new audience. 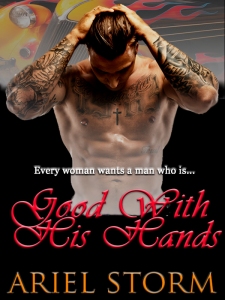 He’s a sexy bad boy mechanic with a reputation. She’s a guarded reporter with too much to lose to play with fire. She tries to resist him but one touch from him changes everything.

Recent college graduate Gabby Richards has big plans for her life. At the top of those plans is landing a job for a major magazine in Chicago. While Gabby is busy mapping out her career as a journalist, her father gets seriously injured. Upon hearing of his accident, Gabby drops everything, including her career plans, and heads home to her small, rural town of Clear Lake, but vows to return to Chicago as soon as her father is well.

On her first day back in her hometown she has a run-in with the town’s sexy new mechanic, Jake Harrison, and meeting him turns everything upside-down. Despite her wishes to remain single, she doesn’t see the harm in going on a few dates with him. Soon Jake is helping Gabby confront her past and bringing out a side of her that has remained hidden for years. Even though she wants to remain focused on her career and return to her city life, she begins to wonder if it’s possible to have it all—career, her dream life in Chicago, and Jake Harrison.

Once she was on the main road headed back into town she noticed a pair of headlights in her rearview mirror. Thanks to the custom paint job, she could spot Jake almost anywhere. She didn’t want to believe he was following her. Gabby kept an eye on his vehicle as she drove until she watched him pull into Harrison’s Garage. A pang of guilt hit her.

She’d been rude to him when telling him goodbye at Stacey’s house. He was obviously going to work on someone’s car—maybe even her own—on his evening off. The least she could do was go back to him and apologize for her abrupt behavior. She pulled the truck onto a side street and turned back toward Jake’s garage. Knowing town gossip could be voracious she pulled behind the service station and parked. The bay doors in front of the business were closed, so she knocked on the side door that led into the large repair area.

Jake opened the door and her gaze traveled the length of his torso. He wasn’t wearing a shirt. Apparently she’d interrupted him as he was changing into his work uniform. If he looked good with his clothes on, the man was even sexier without them. His muscular chest and shoulders were covered in tattoos. The low light inside the garage caused the silver hoop in his right nipple to gleam.

“Hey,” she said softly. Her mouth watered and she forgot the apology she’d been rehearsing in her mind.

He took a step back so she could walk in. His gaze flicked over her face and he reached out for her hair, letting a few of the strands slip through his fingers. She walked toward him, closing the distance between them. His mouth was on hers in an instant. A low purring sound emitted from her throat as he breached her lips with his tongue.

She was so glad he didn’t feel the need for words at the moment. His big hands ran along the sides of her torso, down her waist and rested on her hips. He pulled her to him so they were lined up head to toe. Since he was almost a foot taller than her his erection rested against her hip. He was thick and hard. Jake walked her backwards a few steps until she felt her back connect with the door.

Gabby wrapped her legs around his waist and he held her up as if she weighed nothing, with only a hand on her bottom. His other hand slid under her shirt to cup her breast. She tore her mouth free from his and leaned her head against the door. He pushed up the satin cup of her bra and toyed with her nipple.

He pushed the other cup down then pulled her shirt over her head. She looked at him. She wanted to see if how she looked pleased him. His blue eyes narrowed and even in the dim lighting she could see the desire burning behind them. He leaned down and put one of her nipples in his mouth. Flicking the point with his tongue as his gaze stayed focused on hers.

She wanted to touch him, wanted him to know how crazy he was making her. Gabby gripped the corded muscles of his biceps and squeezed him there. He pushed himself against her middle, causing his erection to nestle in the hollow of her belly button. The rough denim material of his shorts pressed against her skin and it made her crave to feel him. She didn’t want any barriers between them.

He released her breast with a pop. “You got it sweetheart.”

He moved his hand from her ass and she slid down the wall. Once her feet connected with solid ground she reached for his waistband. As she unbuttoned his shorts, he helped her out of her bottoms and panties. Beneath his shorts he wore plaid boxers, she pushed them down and his erection bobbed when she freed it from the confines of his clothing.

She palmed his length, loving the feeling of the velvety warmth of his cock. He lived up to her fantasies—and then some—he was huge. The wide head glistened and she rubbed her thumb across the moisture.

He wrapped his hand around hers and removed himself from her hold. She furrowed her brows, unsure of why he didn’t want her touching him. He bent and pulled his wallet from his shorts. A foil package materialized and he ripped it open with his teeth. Jake rolled the latex down his length and stepped closer to her again.

Placing both hands on the door on either side of her head he bent down and kissed her lips. He placed both hands on her hips and ran them down until they were on her thighs. He pushed them apart and she widened her stance. Jake’s fingers grazed the top of her mound before his thumb connected with her clit. He circled it and she moaned at the pressure. She was wet and ready for him. As far as she was concerned everything else they’d done to this point had served as foreplay—the playful banter, dinner twice and of course that incredible kiss in her dad’s driveway last night.

Gabby lifted her leg and hooked it around the back of his thigh. With that bit of encouragement from her he cupped her beneath her ass and lifted her into place. Her back was braced against the door once again and his erection pressed against her clit. He slid it along her seam, teasing her, letting the head stroke her clit. He looked her in the eyes and reached between their bodies. Jake notched the head of his cock to her opening and without breaking eye contact he eased the tip inside her.

They moaned as he pressed in further, slowly letting her body accommodate him. Then, he started to move. He rocked into her and Gaby had never felt something so incredible. She’d been with other men before, but never anyone as big as Jake, never anyone as capable. He’d only just begun and he was already hitting places inside her she’d never been touched before. He licked the pad of his thumb and strummed her nipple with the moistened pad.

He took her sounds as an invitation to go deeper, harder. She arched her back and cried out as he drug his thumb from her breast to her clit. He gritted his teeth and she knew that things must’ve been feeling as good for Jake as they were for her. Feeling emboldened, she reached out and gave his nipple ring a tug. He let out a curse and reared his head back.

“You really shouldn’t have done that, sweetheart. Now, I’m not even going to pretend to hold myself back.”

Want more of Jake and Gabby’s sexy story? You can get Good With His Hands at All Romance eBooks, Amazon, Amazon CA, Amazon UK, Barnes and Nobleand Kobo.

Take a peak at what other participants in this week’s Mid Week Tease are sharing http://midweektease.blogspot.com/2016/09/midweektease-october-5-2016.html

8 thoughts on “Mid Week Tease ~ Good With His Hands”